“Rouge ou rosé?” the man sitting opposite asks, proffering two vins du pays – one red, one pink – a bottle in each hand.

Clear, South of France sunlight glows like pride through the bottles of local wine. Meanwhile, the herby aroma from a platter of crisp, succulent pork making its way down the table, wafts over us. A giant plane tree rustles and quivers, shading our table. All around, the spirit of conviviality reigns.

But hold on a minute. It’s 8:30 in the morning; this is breakfast. What about coffee?

The quick answer is a toast to my health — Santé!  Forget about coffee, drink up and chow down. This is a “chuck wagon” breakfast, Beaucaire style. 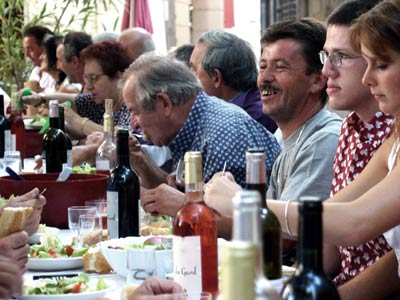 Barbecue Breakfast in Beaucare with the Club Taurin

The club, founded about fifty years ago, is made up of friends who share an enthusiasm for the native Camargue bull and its traditions. Their name, Trident, comes from the lance that gardians —  Camargue cowboys – use to control and direct the animals. The trident is tipped with three tiny prongs, each about a half inch long, and, as one of my hosts explains, it’s  pour piquer le taureau – for pricking the bull.

Beaucaire on the Canal du Rhone a Sete

Before sitting down at the long, L-shaped arrangement of tables in the square, we watched the women of the Bar Taurin prepare the main course. Using round, flat slotted utensils, they stirred about 50 pounds of pork rib chops in a gigantic paella pan balanced over a charcoal brazier on a framework of steel pipes.

Like good cooks everywhere, they were reluctant to reveal their secret ingredients, but as the meat sizzled gently the unmistakeable scent of herbes de Provence, prickled our noses. 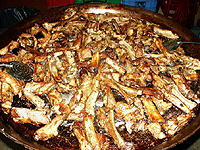 Pork Ribs with Classic Herbes de Provence - Combine the following dried herbs in a small bowl: 1 tsp. thyme 1 tsp ground rosemary 1 tsp. summer savory ½ tsp. lavender (optional but very Provençal!) 1 tsp. marjoram 1 tsp. Basil ½ tsp sage ½ tsp. oregano Crush slightly with a pestle or the back of a spoon and store in an airtight container. Season 3 to 4 pounds of meaty pork ribs or chops with salt, pepper and herbes de Provence. Arrange, one layer deep in a wide flat pan. A paella pan is ideal but a large, shallow casserole or frying pan with a fireproof handle will do. Cook over a medium fire, stirring occasionally, for 1½ hours or until well browned and crisp.

Big bowls of salad, studded with boiled eggs and the wrinkly Grossane olives sat waiting to be tossed with anchoiade, a warm, tangy dressing of anchovies, capers, garlic and olive oil. Traditionally, anyone passing through the square is invited to join club members for breakfast, so about 60 people would eventually be fed.

Breakfast begins with a bang—quite literally with the explosion of a maroon to launch the day’s festivities. As we dig in, using crusty French bread to sop up all the juices, my hosts explain that the Fêtes de la Madeleine commemorates an ancient commercial fair which, for 400 years, made  Beaucaire one of the richest towns in Europe. During the Foire de la Madeleine, which reached its peak in the 1600s, as many as 50,000 people a day came from all over the known world to trade textiles and exotic goods, tax-free. The fair was so important that local families made their entire annual income simply by renting out their homes to the fair-goers. Beaucaire’s narrow and deeply shadowed lanes are studded with baroque mansions that became medieval “bed & breakfasts” for about ten-days every year.

Recipe for Anchoiade:  Makes about 1¼ cups

In a small saucepan, gently warm the 30 chopped anchovy filets in half the olive oil for about five minute, stirring constantly. Don’t fry. The anchovies will melt in the oil, leaving a kind of thick paste. Remove from heat. Add several generous grinds of black pepper. Stir in the capers, garlic and vinegar. Gradually incorporate the rest of the olive oil

The fair ended when railroads reduced the transport of goods along the Rhône in the early 19th century. The current celebration has been going on for a little over  100 years, with a few pauses for world wars. Of Beaucaire’s nine annual festivals, this one is the most famous; at least 14,000 people, mostly visitors from elsewhere in France, will attend today’s events.

But what, I wonder, do bulls and cowboys have to do with it?

“People here love the bulls,” a woman laughs.  “So when we celebrate, we always include the bulls.”

The native Camargue bull is smaller and, so people say, feistier than the Spanish bulls used in the corrida. People like to “play” with them, in games like the Abrivado and the Course Camarguaise, which do not end with the death of the animal. In fact, Camargue bulls have names and, with enough personality and intelligence, can become stars in their own right, winning kudos and money for the manades (Camargue ranches) that breed them.

Before we have a chance to find out more, we’re bundled into a Jeep for the journey to the Abbaye de Saint Roman, a 1600 year old Gallo-Roman abbey carved into the living rock about three miles from the town center. Here, after a blessing the Abrivado will begin.

An Abrivado represents the taking of the bulls from the fields to the arena as it was done in the past. The manadiers (ranchers) show off their stock and the gardians demonstrate their skills. Saïd, our driver and a Trident Club member, remarks that he likes the festival because it is the one day of the year that he gets to drive the Jeep. There is something about the relish with which he says this that suggests we’re in for more than a bumpy ride…©Ferne Arfin 2002-2010, All Rights Reserved